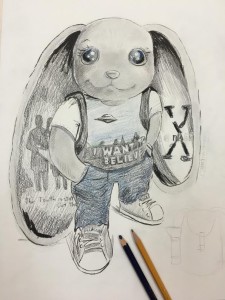 … It has begun right after the finale of the 10th season, when we, two Ksenias, were appalled by the number of negative responses both to the continuation of the series and to its creators; we decided not to argue, not to dissuade, but simply to show to Chris Carter and the whole team that there are incomparably a lot more people who are genuinely grateful for the opportunity to see Mulder and Scully’s adventures once again. We were supported by the fans and this is how our small team was born.

Almost immediately we decided that the symbol of our action would be a rabbit. After all a rabbit is kind of an informal symbol of Russia. We decided to design our rabbit based on the completely individual project. In our minds we saw ears with a print of classic letter X and a famous phrase I Want To Believe! At that point the future hosts and participants started to join our action. All together we continued to think over the image. The idea was to choose clothes accordingly – we were thinking about the same t-shirt William Scully wore in one of the episodes of the 9th season, there were some thoughts to give him a hat with ears from the episode William, to hang on his neck the pendant Margaret Scully had in the 10th season, and many, many more things. As a result, our rabbit got a t-shirt with a recognizable print of the well-known poster I WANT TO BELIEVE, jeans and sneakers. As a true special agent – he got a flashlight. It wasn’t simple to choose the ears, out of several options we ended up with the brightest.

We would like to thank all the guys that has supported our idea and helped to bring it to life!

And now, William the Rabbit is ready to commence his journey during which he will get the most delightful impressions, original souvenirs and lots of nice words!

🏆 Congratulations to @GillianA with her first nomination for the outstanding performance as Margaret Thatcher in @TheCrownNetflix! 👑#GillianAnderson #TheCrown #Netflix #ДжиллианАндерсон #Корона pic.twitter.com/sV9xGUsG2Y

2021 is a time for new things. “Truly Like Lightning” is a story unlike anything I’ve written before. Head over to Instagram or Facebook to hear a short excerpt, hope you enjoy it. You can pre-order now, link in my bio. pic.twitter.com/jn0gPqEMeu

.@thexfiles has found a new home: starting February 23, it will be available on the Disney+ in Europe, Australia, New Zealand and Canada.Читать на русском: thex-files.ru/?p=7306 pic.twitter.com/Vlb2dmSgf2

Happy New Year! 🎄🍷We are happy to say goodbye to 2020 and cheers everyone, don't give up, believe in miracles and stay with us all next year!Take an idea for a photo this New Year's Eve and join us with congratulations in reply 👇🏻#TheXFiles #XFiles #СекретныеМатериалы pic.twitter.com/1kW2lwFzKR