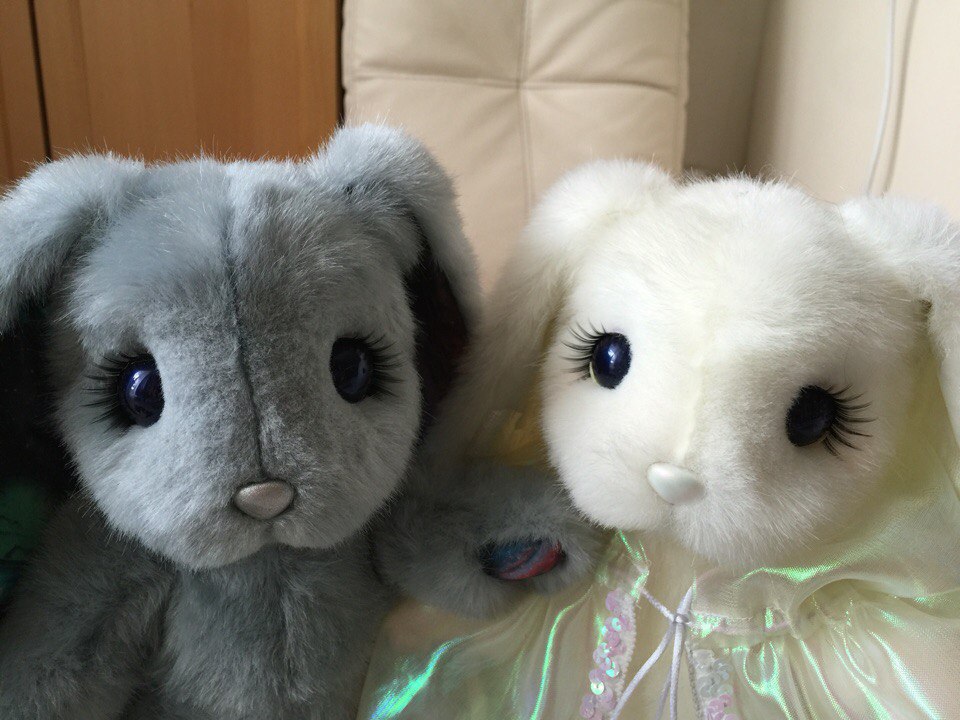 The image of the William the Rabbit was born in the minds of two of the most ordinary people. Long cold nights, we thought through all the details of his appearance, clothing, mentally draws every detail. Finally, armed with the support of friends, the order for the Secret Rabbit was issued. And reached the days of waiting for a meeting with a small furry hero. Months passed, spring came and behold on the appointed day at my door rang the courier who brought the precious package. The first impression always the strongest. When something long you wait to receive it brings special excitement and thrill. That is so magical in my hands was our William.
Little-pussy with soft gray fur and huge fathomless eyes the color of the night sky. I never thought things just toys always found in each something spiritual. They are fearful, joyful or sad. It all depends on the relationship to them. William is not just a toy it was created as a symbol of infinite gratitude from pure hearts. And it turned out exactly as we did and were. Sweet, kind, soft! Naive. The box came with him his clothes, shoes and accessories. Here with just such a set of small lovely things here is defenseless lump turned into quite a serious and representative X-philes.
Eared little-pussy hero immediately took a special place in our hearts. Created with love and designed to give love! Look in his eyes! Then I did not think of how it will be difficult to leave it and to release it to carry out the intended mission for which he has been given birth! Memory purely for yourself a hasty photo on your mobile. Now it is a little sad that has not managed to imprint everything. And only a few details. He did not yet know how many people around the world love him and wait. How many interesting things he would see in his long journey. But all this happens to him a lot later, but for now here is home, safe, comfort, family and friends.
With great look of his “brother” I waited a little white Rabbit Luna, and even more eagerly awaited him one little girl named Vivian. My darlings brave small Little X-Philes. She was his best friend, trembling cared for him while he lived with us. I watched with him 10 season and explained to him that «Scully will fixed Mulder» (c) and that in 11 all season will be good. As still cool to be a child, how many of purity and immediacy in children’s judgments. Sometimes they seem naive, but make us adults believe that miracles still happen. She misses her little-friend Will, and I am sure he misses her too. How do you want to believe that the dream of millions of adults and one little girl will be made and we will see again our favorite characters! We are still very, very much want to believe!

In a few days William, the Rabbit learned, participated in photo shoots and with new forces has officially opened their mission!

Familiarity Bunnies with Moscow started with a very heart – Red square. On the first day he visited the St. Basiles Cathedral, wander the feet through the historic Red square stone, photographed against the backdrop of the State Historical Museum, listened to the chiming clock of the Spassky Tower. Day was issued fussing, around there were many people, it is a lot of tourists therefore for a long time he has not lingered on the square. Photographed against the backdrop of «GUM» and went to eat its famous ice-cream, which just need to try for anyone visiting the capital. The next day, Will had an exciting journey in the famous Russian Exhibition Centre (VDNH), where he with great pleasure considered his miraculous fountains, rode through the area on the mini-train and slightly trampled grass. After quite a long journey at VDNH, he went to the Catholic receipt of Immaculate conception of Blessed Virgin Mariya, to evening mass, and listened to the enchanting organ and wandered through the beautiful Church grounds. Tired but happy he went home to rest. Unfortunately, the next day our Hero in Moscow was marked not very good weather.
In the city it became cold and rainy, but it has not prevented brave Will to visit one of the most recognizable sights of Moscow – the Cathedral of Christ the Saviour. Having armed with an umbrella he boldly went all the all Patriarshy Bridge and was photographed against towers of the Kremlin. Weather continued not to please, but it has not stopped us having a little warmed and having drunk a cup of hot coffee, we have gone to one amazing place – the Moscow international business center «Moscow City». There was a wish to show to our Hero as much as possible everything, but remained to time very little therefore we have stopped by in the downtown and have made some more pictures in the territory of the business center «White Square». Here for all of us have past three days of stay of Will of the house so quickly. But, as well as it is necessary, the most interesting still waited for all ahead – a meeting of the Moscow fan-club, new acquaintances. And the most important event for the fluffy Hero – a meeting with his St. Petersburg mother – Ksenia! Hare and all of us looked forward day of her arrival and here, in the appointed hour we have gone to a long-awaited meeting! Weather has not pleased us again, under a cold rain we waited for our friend at Three Station Square and here at last have waited!!!

Moscow cloudy summer morning, majestic Kremlin towers, square balloons in the colors of the Russian tricolor and long eared buddy who conquers cobblestones of Red Square – that’s how our meeting started. The first and most significant goal of this project, which aims to say thank you to Chris Carter for a wonderful, unique, interesting, unpredictable and most anticipated season 10!

The chimes struck exactly one hour and our company began to gather, but not without challenges, of course. Due to the lack of places in the parking lot next to the Red Square, our main man and organizer of the project, together with the rabbit, balloons, and other vitally important for a meeting things, got lost in the depths of children’s GUM, where the parking lot arranged so that the exit can be found only by a very resourceful person …

So .. clock struck exactly one hour, but we met hardly at 13:15 genuinely enjoying each other, and because of that we became the subject of attention from foreign people, who were sightseeing the beauty of the heart of Moscow and staring at emotion  “weird Russians” ( a couple of times people took pictures of us, together with William, of course). Photo shoot with the sun and without the sun, photos in front of the cathedrals and museums, it all ended when our wonderful square balloons said “sorry” and flew into the sky. We slowly began moving to the next part of our meeting, namely the quest: “get to the” Starbucks “in the center of Moscow, by violating a number of rules and without losing a single member”

Departure from the parking lot was quite a simple task, nevertheless it brought us, a lot of fun moments, compared with what we had to go through the central streets with the six of us (not including William) in the car, which was designed for no more than five. But are we the fans of “The X-Files” for nothing? Maybe it was luck, or the providence was on our side, but we have successfully overcame all the obstacles and arrived to the cozy café, which hosted the most important part of our meeting – tea / coffee party with wonderful conversations, endless laughter and joy of sharing common interests, and watching two of the most iconic episodes of the last season “My Struggle” and “My Struggle 2”. Later on Skype we were joined by Sasha (one of the biggest fans of the “X-Files” in the Krasnodar region and a member of the team «WR»), who just couldn’t not to stay even for a minute as a part of our company in this important moment of the beginning of the project.

When the tea was done, and we watched the episodes, we went for a walk around Moscow, eager to capture our rabbit at more memorable places of Moscow. The day was so warm … And our meeting was so friendly and joyful, that we really didn’t want to say goodbye. And we gave each other a promise that we will meet again, even without William. The most important thing is that he has united us in this wonderful idea. It is very important to be able to say “thank you” for what brings joy, for what makes our life colorful and changed us and made the world a better place. We have teamed up to say ‘thank you’ to Chris Carter for his wonderful tv show, which is no doubt will be called a work of art. A work of art, as we know, live forever. 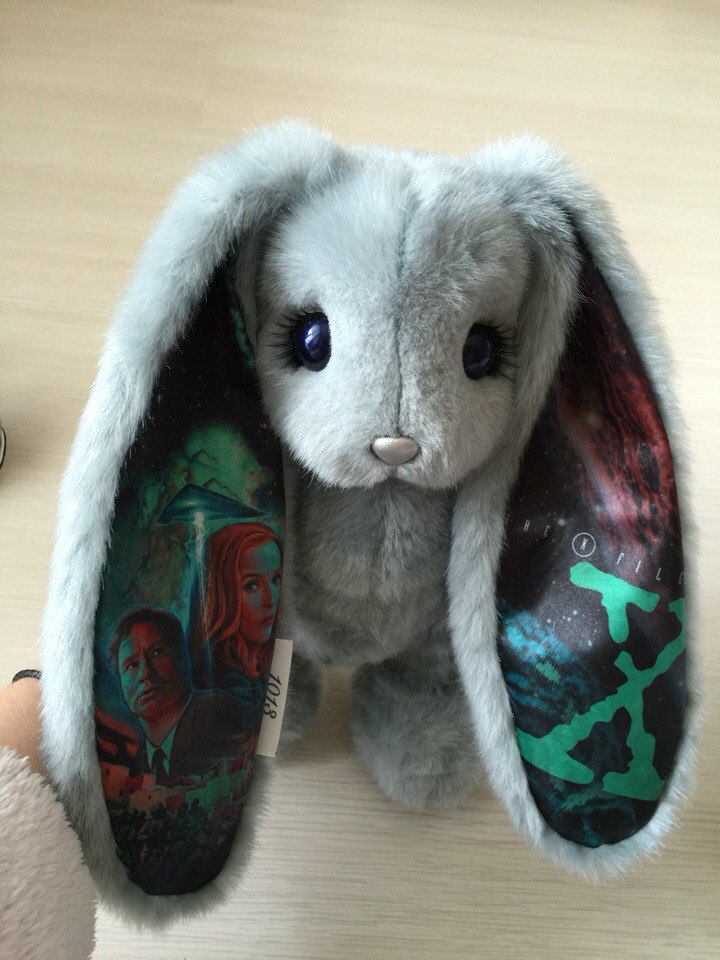 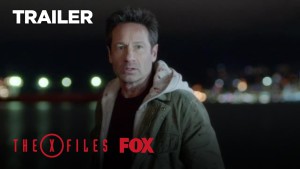 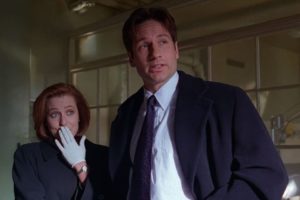